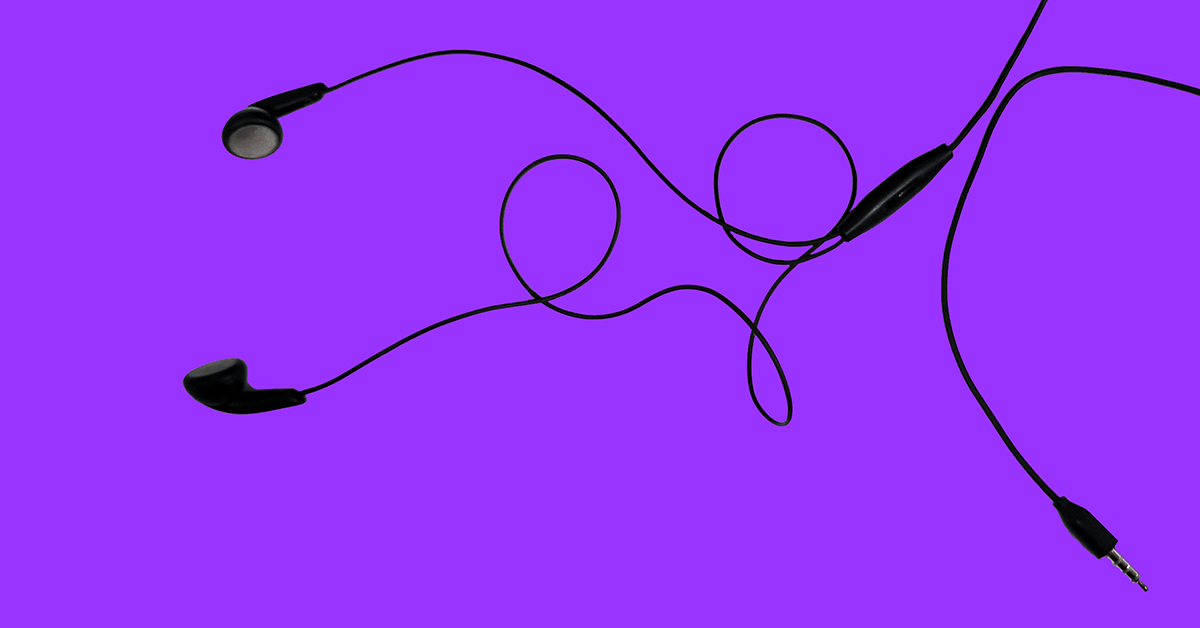 This short story was written in a minute story writing class at the Kirjan talo (House of Books). The base of the story was an object I always carry with me. Surely no one will be surprised that it was my headphones. Everything I am or do always goes back to music at some point. Sometimes it feels like no word will find its place on a paper without music. By the way, I dream of the same kind of tailor-made headphones that the character of the story is using.

He plugged in the headphones. The earbuds sat perfectly, they were tailor-made and had cost as much as the monthly rent of his small apartment he used to live in when he was still studying. But he had to pay for the luxury if he wanted to make life feel smooth.

There was a direct connection with the headphones and his well-being at work, so he was actually able to mark them as an expense when filing his tax returns. Before using the tailor-made earbuds he had used the mass-produced headphones, but they never felt right and kept dropping from his ears on the critical moments. Big headsets were clumsy and could draw too much attention to him. The wires were also annoying, so nowadays he used only Bluetooth models. Wireless headphones consumed a lot of phone battery, but it was still better than getting the wires tangled with limbs and clothes of panicked people.

He made playlists. He needed to get into the right mood when working. Each gig was unique, so each gig needed its own playlist. He named the playlists according to well-known philosophers and shared them public in a streaming service to anyone who wanted to listen to well-built musical experiences. He considered his music taste wide and sophisticated.

Today, he had chosen some classical music and combined it with 80s synth pop. Drama-wise the playlist was perfect. It began with a cautious warm-up and accelerated into a crackling joy before falling back into a bustling peace. He lifted a large hockey bag onto his shoulder and stepped out from the train. He always used public transportation while working. He looked tidy but ordinary, and he knew that it was the only way people could describe him if any authoritative would ever even happen to ask about him.

When he got to the site, he prepared his tool and logged into his mobile banking service to check out that he had been paid advanced for the job as should. Then he adjusted his earbuds and started his work. The music that flowed into his ears and filled his sense, muted the desperate screams of the targets. 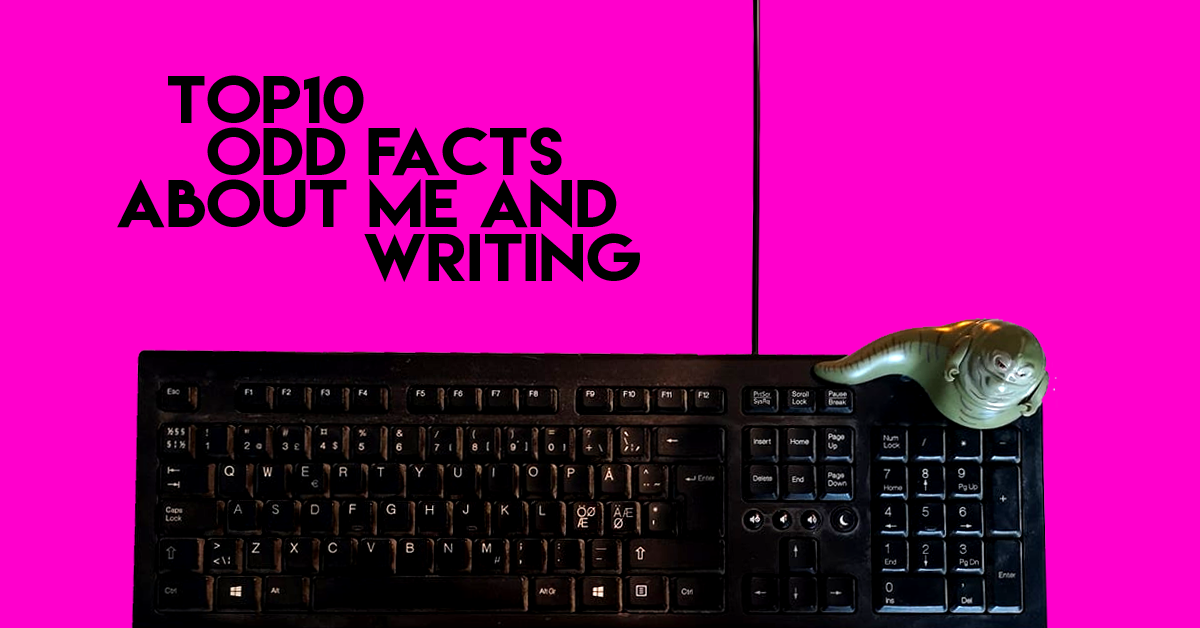 Each writer has peculiar features associated with writing. I listed my TOP10 of mine and I want to challenge all my writer friends to do the same.

1. I cannot write in comfortable relaxed positions. I sit back straight on my desktop.

2. I listen to music when I write. Sometimes the music is related to what I write. The rest of the time it’s just music. Sometimes I may listen to a certain song many times before I start to write to get into the right mood.

3. Jabba the Hutt sits on the edge of my keyboard, watching my work.

4. When I write at home, there is always a dog sleeping on my feet.

5. I need light to write. Since my desktop is located at the point where three rooms meet, I light up the table light, and the lights in the kitchen, living room and hallway to create the right lighting.

6. When I write, I see and experience things as audiovisual. I may not see my exactly how my main characters look, but I see camera angles and cuts, I hear background music and other sound effects. Sometimes I see how the story would be set on a theater stage.

7. I can remember my stories word to word. The livelier the story becomes, the more confident I can be that it will stay in my mind with all the details. This is my biggest problem, because when the story is preserved in my head as a whole, it can keep me from writing. On the other hand, for the same reason, I can write polished text very quickly.

8. I could talk about writing incessantly. I wish I could use that time on writing.

9. Most of my stories form from a single sentence, title, name of the character, or similar single element.

10. I can write a finished short story in one sitting without editing but I still over-edit my texts. 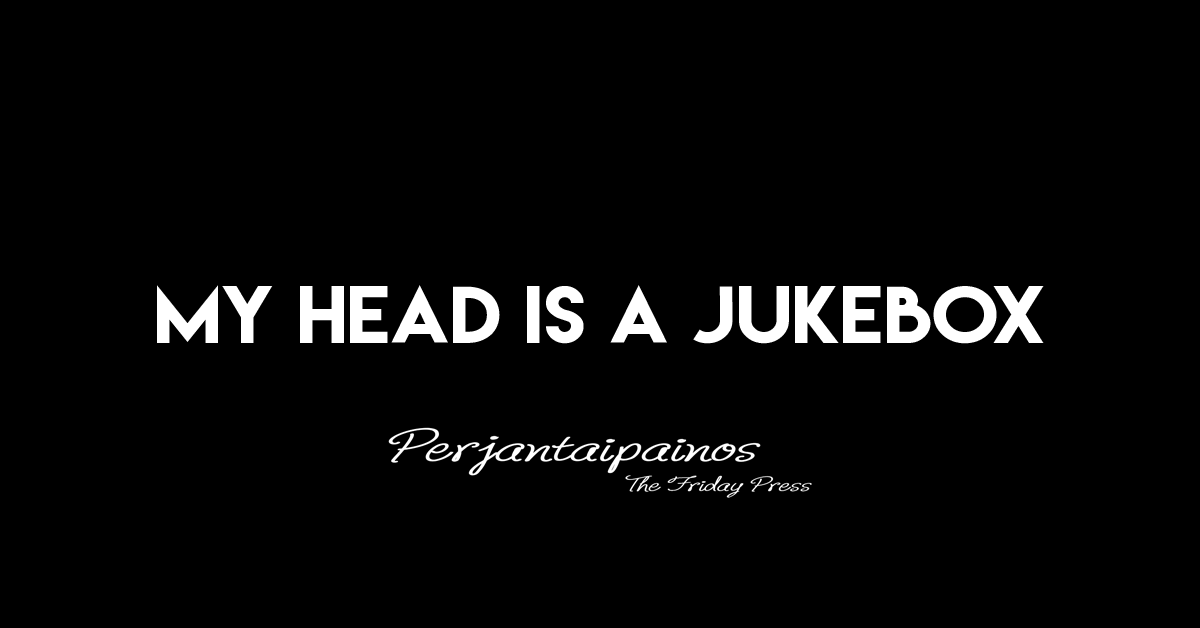 (I wrote this short story a long time ago in Finnish but felt like trying to translate in English too. I always use music when I write, so I guess this story was originally born from there.)

No, this does not mean I’m gone crazy.

Stop prattling. Tell about us!

Quiet please, we agreed that I will tell the story. Sorry about that. This is sometimes a bit hard. You will understand after I have explained some backgrounds of this story. I am just an ordinary guy, bachelor of arts. I have a stupid underpaid job that kills all my creativity and just enough friends to prove that I’m not a hermit. I wear jeans and sweaters, I go to a cheap barber shop to cut my hair and I do change socks and boxers every day. I got a mustache.

This explains a lot, especially the mustache.

Do not care about them, they tend to be a handful sometimes. You know how rock stars are. But let’s get back to the story. Once upon a time I met a girl and fell in love. She was a dancer, and she wanted everything to be like a movie. You know the type. When we went on a date everything was supposed to happen in certain ways, like following the script. When we had sex she wanted the lighting to be perfect. As we walked down the street, she wanted to create the right atmosphere. There had to be drama, comedy, and romance.

I do not like movies. We broke up. She thought I was boring, too ordinary.

You actually were boring at that time.

I was depressed, even though it didn’t make any sense. I really don’t like movies.

But I like the music. My taste in music is very eclectic, but I still dare to claim that no good music has been made since the 80s. The early 90s disco pop I can still understand but everything made after that is just a pathetic shit or reminds me of flavorless strawberry chewing gum.

I used to buy records, but then I became an art student and I had to take tons of student loan. So I sold all my records. I got a good prize from some of the vinyl but CDs I had to sell cheap. Nowadays it doesn’t piss me out that bad anymore.

Sometimes I thought about the girl (who lived in the movies which I didn’t like) and wondered if she was happy. Did she walk in the riverbank slowly and pensive like there was a camera following her? Did she sit on the corner table of a café and pan sharply through the people who had become the supernumeraries in her scene. I really wanted to know how to be that happy.

Then you found us!

Do not go ahead. So, I was in a situation where I no longer had my records, but I still was in debt. I wasn’t happy and I still thought about the girl, the one who loved the movies. I was anxious and took a walk on the riverside, trying to imagine cameras and lamps and a director who asked me to be more relaxed, less worried, little bit ruminative. It made me even more anxious. And then I heard the song. After a beautiful intro, Ann Wilson’s gorgeous voice began to tell the story about loneliness.

I looked around, but I didn’t see anything out of the ordinary. People walked by with lifted jacket collars and tensed expressions on their faces. No one else seemed to hear the song, but in my ears, it just got louder and louder. When the chorus filled my head I felt a tremendous liberating passion inside me. My footsteps found their way to the rhythm of the song, the lyrics made me feel the moment in a brand new way. It was me and the music. My music. I still didn’t like movies but now everything became an endless playlist.

In the morning when I wake up, the music gives me a hint of what the day will be like. AC/DC’s T.N.T. is all about fighter spirit. Ozzy’s Mr. Crowley often says that day is getting worse, and if I hear Kaseva I know it’s not worth getting up from the bed at all. The music I do my work with includes Bon Jovi, Bruce Springsteen and sometimes even something classical. In a grocery store, I tend to shop with some light Finnish schlagers. The boring convenience food tastes much better when it is enjoyed with songs from Rauli Badding. If I ever find a woman (who loves music more than movies) I want to make love to her inspired by Madonna’s Like a Virgin and later with the passion of Bryan Adams’ Heaven.

My whole life is built with a steady flood of music. Just like if there would be a radio or jukebox inside of me, but without the annoying commercials or hosts. News I can watch from TV if I need to know what is going on with the world. But mainly I live from the music and the music lives in me.

But that’s not all. Tell them what happened then. Tell them about us.

All right, all right. Then my internal playlist became a bit more than just background music. I met them all. They came to visit, so to say. Ozzy Osbourne’s articulation is sometimes impossible to follow, but otherwise, they are pretty good guys. Quite relaxed. They hang out with me on nights and keep me company at work and when I’m jogging. They sleep with me, travel with me. It’s a bit difficult to explain, but I really do like music.

We have fun times together, we must admit.

I started to jog because the Survivor required me to do so. When I get sick Chrissie Hynde takes care of me. On a date, I’m a perfect gentleman, thanks to Marie and Per. In social situations, I act cool, because Sambora and Santana got my back. When I drive Michael Jackson is usually there with me, but deeper conversations I like to have with Sting or Bono.

You no longer need a woman who likes movies. And you are not lonely anymore.

I do not want anything anymore, that’s right. I know studies that show how music makes good to a person. Keeps brain activity virulent. Makes you stronger. Makes you happy. When people have music, they don’t need anything else.

But this doesn’t mean I’m gone crazy. It just means that I have started to live.

I write all my blog posts also in English.

If you want to read short stories, scenes, poems and prompts written in English click the link below.

Writer and a nerd looking for perfect sentences and wondering about lifestyle of a writer.

Do not copy or use my texts without permission, thank you.

This message is only visible to admins.

I decided to try out a office away from office and now… https://www.instagram.com/p/B3ZK9s4BS9j/?igshid=4wqjox0mn21g